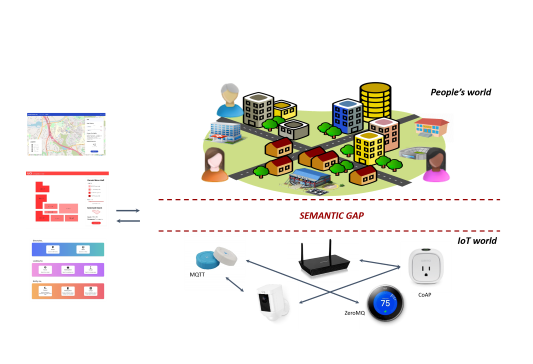 SemIoTic is a middleware framework for IoT smart spaces that provides application developers and end-users with a semantic domain-relevant view of a smart space while hiding the complexity of having to deal with/understand lower-level information generated by sensors and actuators. SemIoTic uses a metamodel based on the popular SOSA/SSN ontology with some extensions to represent relationships between the low-level IoT devices' world (i.e., devices, observations) and semantic concepts (i.e., observable attributes of users and spaces). It supports a language where users can express their action requirements (i.e., requests for sensor data, commands for actuators, and privacy preferences) in terms of user-friendly high-level concepts. We present an ontology-based algorithmic approach to translate user-defined actions into sensor/actuators commands. Finally, our end-to-end approach includes a cross-layer solution to provide interoperability with diverse IoT devices and their data exchange protocols.

Several instances of SemIoTic have been deployed and used in IoT spaces. At the Donald Bren Hall building of UC Irvine, building occupants have access to Concierge and Building Analytics smart applications and building administrators have access to a Contact Tracing Application to help combat the spread of COVID-19. Also, SemIoTic has been deployed inside a navy ship from the Naval Information Warfare Center (NIWC) in the context of the Trident Warrior exercise 2019/2020. SemIoTic enabled testing of applications such as occupancy analysis in multiple regions of the ship. 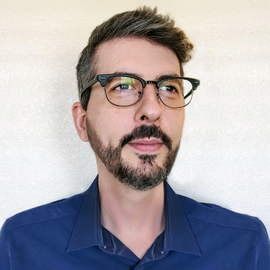 My research interests include Data Management, Knowledge Representation, the Internet of Things, and Privacy.

The SemIoTic Ecosystem: A Semantic Bridge between IoT Devices and Smart Spaces
Smart space administration and application development is challenging in part due to the semantic gap that exists between the …
Roberto Yus, Georgios Bouloukakis, Sharad Mehrotra, Nalini Venkatasubramanian
Cite Code Project